I constantly see and hear things about breastfeeding rates in the UK being low. There are continuous campaigns to encourage mums to breastfeed their babies, highlighting all the benefits over bottle feeding. Often this is rammed down mothers throats and those that choose not to breastfeed or are unable to are made to feel inadequate. I touch on this issue more in “Your baby, your choice“.

Having now breastfed four babies I can say that breastfeeding is a partnership between mother and baby and all mums and babies approach it differently.

My youngest is an expert breastfeeder and he knows exactly what he wants and when. We try and work as a team and we rarely get to the point where he is crying for food, when he starts chewing his fist, I feed him. That works for us.

I can totally appreciate why some mums stop breastfeeding so soon after the birth of their babies. After attending a routine weigh-in with the health visitor recently, I can understand how mums can be made to feel uncertain and question their approach. Our regular health visitor was on holiday so we were met by her stand in – an older lady who peered at me over her glasses as she called “number 18!”

I stripped a happy, giggly baby off and popped him in the scales. He had gained weight since he was last weighed two weeks ago. However, after plotting his weight on her chart she informed me in a condescending tone that his weight had dipped slightly below the line he was following.

After asking me if I was breastfeeding, she then immediately asked me if I had considered topping him up with formula. Erm…no I had not, I thought we were doing perfectly fine thank you very much. I could feel myself becoming defensive.

She then proceeded in trying her best to convince me I was doing something wrong, telling me I needed to look out for the feeding cues. I let her dig herself a hole before telling her he was my forth baby and I was quite capable of noticing when he was hungry! She continued…”I think we need to get you to the breastfeeding support group ASAP!”

Seriously! It’s no wonder breastfeeding rates are low with busy bodies like her!

I have since made a complaint as I feel quite strongly that someone less confident about breastfeeding or perhaps a first time mum could be easily put off by this woman. 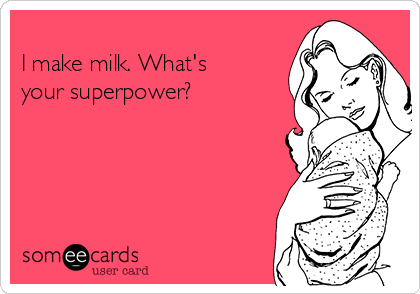