My experience with hay fever began when I was around 15. I don’t recall being affected before then. I went from completely unaffected one year to miserable the year after.

My hay fever has always been at the start of the season. So normally I would only really suffer during April, May and early June. This has been slightly weather dependent over the years and one year I suffered for four months solid.

My hay fever has manifested itself in the form of an itchy, dry nose and lots of sneezing and red, itchy eyes. The eyes are much harder to cope with and as a contact lense wearer this can be especially problematic.

A few summers ago I suffered a terrible eye infection which was as a result of a bad dose of hay fever, combined with wearing contact lenses. It was so painful I had to wear sunglasses inside. I never want to go back to that.

Over the years I have tried a number of different things to tackle hay fever, ranging from prescribed tablets to homeopathic remedies.  Nothing has really worked successfully.

Having four children and breastfeeding has also meant that I have had to be really careful about what I take and more often than not I have just ridden it out.

This year the classic itchy nostrils began about two weeks ago and the sneezing has followed. The eyes are holding out so far but I’m expecting them to follow.

I have been trying something completely different this time and I feel like it is actually working. It is called Allergie Block and it can be used by children, pregnant women and nursing mothers, which is a real bonus. 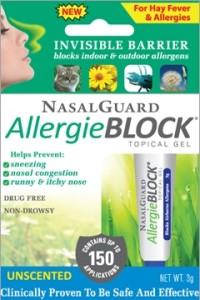 NasalGuard AllergieBLOCK® is a drug-free solution to alleviate mild allergy symptoms like sneezing, hay fever, nasal congestion, runny and itchy nose by blocking allergens including pollen, ragwort/ragweed, dust mites, pet dander, hay and house dust. The invisible gel is non-greasy and quickly dries to the touch. It does not cause side effects like dry mouth or drowsiness and it is a preventative topical gel, this means you should apply it as directed for at least 48 hours before noticing its effects and benefits.

Having said this, I noticed a difference after 24 hours which was brilliant! It is really easy to apply and I feel much better knowing it is drug-free and you don’t need a prescription, you can even go to a pharmacy online.

I wouldn’t say the symptoms have gone but they are much improved,

What are your top tips for dealing with hay fever? What works for you?