You might have read part one of “Little people, big questions” – if not, you can read it here.  If you have a reasonable age gap between your children, you may have had the dreaded question…”how does the baby get in?” Of course, that most likely leads to “how does the baby get out?” … but that is coming up in part three.

When the question came from the big kids, they were five and six years old. It was one of those moments when you take a deep, prolonged breath in to allow some thinking time. 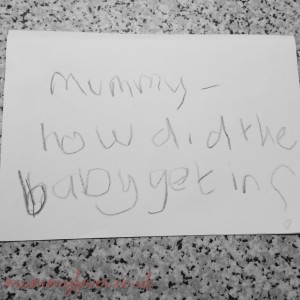 Then I cautiously began…

“To make a baby it takes a special egg from a Mummy and a special seed from a Daddy”.

Then came the next question…

“Where are the eggs and seeds kept”?

Oh goodness, my thought process hadn’t extended beyond a very simple explanation, I was not prepared for question time as well. I continued…

“The eggs and seeds are already inside mummies and daddies. The Daddy has to give one of his special seeds to the Mummy and wait to see if it makes a baby” – as I said it, I knew what was coming next…

“So have you got the seed in already Mummy?”

“Do it now, do it now” they shouted as they bounced excitedly on the bed. “Where do you need to put the seed?”

This was one of those moments as a parent when you really need saving from yourself. I needed Mr Tumble to knock on the front door. He didn’t – I really was going to have to answer them.

“Erm…” I thought – oh gosh, how was I going to get around this one. “In my belly button”. I don’t know where it came from, but I went with it.

Every day after school for the next two weeks the first question was had the seed been put in yet? As time passed they were getting more and more frustrated about the lack of seed and egg action. Why was it taking so long? They wanted to know.

One weekend we were all enjoying some time in the garden. The children were helping me get rid of the weeds. One of them disappeared inside and reappeared a few minutes later with the inside of a red pepper from the food recycling bin. I thought they were going to plant the seeds in the garden, somewhere between the buried hamsters and popcorn tree that had failed to grow, but instead my top was lifted up and the seeds pushed firmly into my navel.

“Right, I’ve done it now, you grown ups were taking too long”.

Have you had to explain how the baby gets in? How did you handle it?