Transitioning from boob to bottle

Although I breastfed all my babies, there has come a time when they have all needed a bottle. Although each time breastfeeding ended, my personal preference would have been for them to drink cows milk from a cup, it never worked out this way and a bottle was always part of their development.

I have always favoured the tommee tippee closer to nature bottles. These were initially marketed as being ‘boob shaped’ and therefore easy to make the transition from breastfeeding.

For three of the four children these worked fine and I continued with what I knew, despite numerous other brands jumping on the “this bottles simulates the breast” bandwagon.

When it came to baby number four, he was breastfed the longest and also the only one I was not able to express for, solely due to the lack of ‘spare’ time required to do this. He refused day after day to take a bottle and after a bout of hand foot and mouth, when breastfeeding came to an abrupt end, he drank next to nothing for five days.

I found another bottle at the back of the cupboard that I had never used, that I think came with the pumping equipment.

By that point anything was worth a go. This was a Lansinoh mOmma and far from being boob shaped, it features the clinically proven NaturalWaveTM Teat designed to encourage baby’s ‘wave-like’ tongue movement, promoting this instinctive sucking action for natural oral development. Although he didn’t initially drink from it,  he would hold it in his mouth at least, and that in itself was progress.

Over the next two weeks he drank more and more each day. Almost three months on he hasn’t forgotten about “booboos” and still enjoys a good grope, but for him now he knows his milk comes from the fridge and is poured into his bottle. He even has his own special word for it, “coo coo” – no idea where that has come from as he has a huge vocabulary for one so small, but it’s quite cute anyway.

He won’t entertain drinking milk from a cup, so for now I’ve been experimenting with a range of things including the Comotomo. 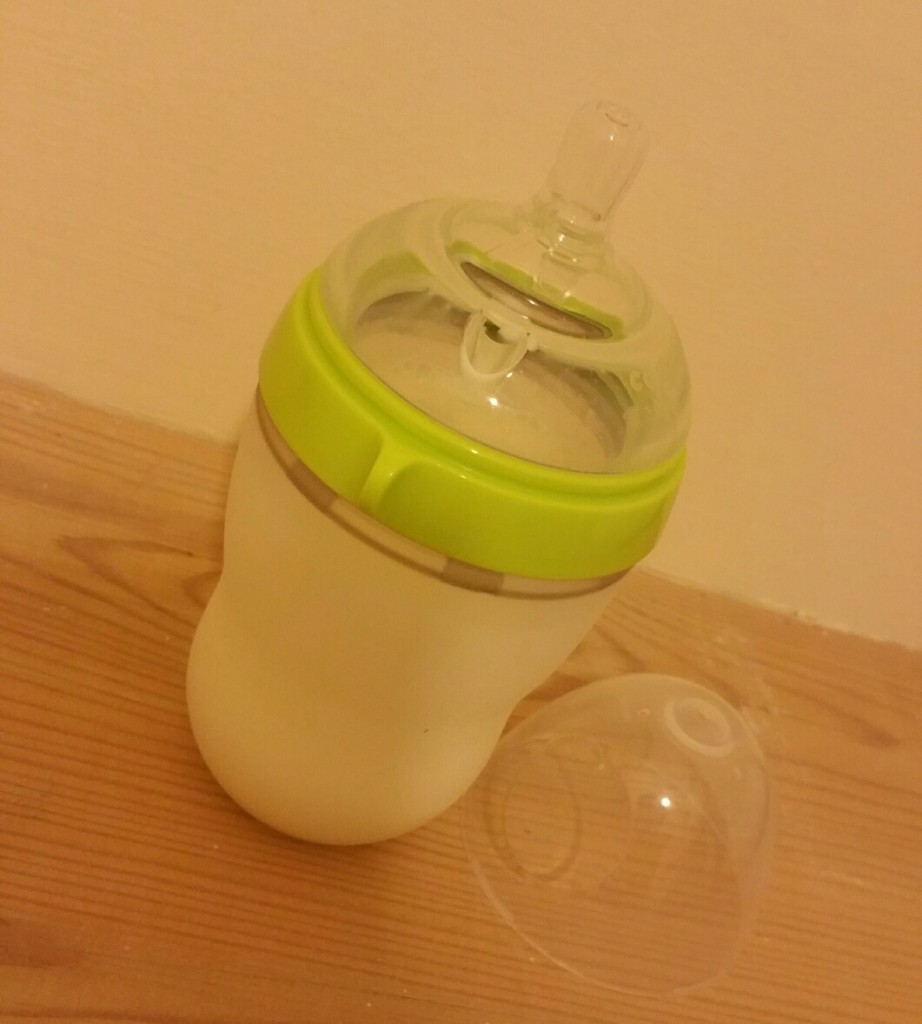 The revolutionary Comotomo baby bottle is designed to provide “the closest thing to breastfeeding in a bottle”. The super 3-inch wide mound and naturally shaped teat allows babies to latch on seamlessly and prevents ‘nipple confusion’ when transitioning between breast and bottle feeding. The entire bottle is made from medical-grade silicon which not only makes it completely safe and hygienic but offers a has a soft, silky, squeezy, skin-like texture which babies love to touch. The unique design also features two essential antic-colic vents to completely eliminate unnecessary air intake allowing peace of mind during feeding. The ‘mummy inspired and baby approved’ Comotomo bottle range is dishwasher, microwave, boiling water and sterilizer safe and is set to become a must-have for new parents across the UK. RRP £14.99 bottle, available from Amazon UK.

Although on the one hand this seems like the next in a long line of bottles that apparently resembles the closest possible thing to breastfeeding, the soft, squeezy bottle base is certainly very different to anything I have previously seen and I love the concept of it. The little man is quite taken with this and loves the fact it is squishy and soft to touch. He clearly finds it very soothing.

Moving from breast to bottle is a different experience for each child . However, there are some impressive products on the market that can help.

How did you make the switch?