You might have read our post a while back on Chickenpox: Being prepared  – if not, you can read it here.

The first ever Chickenpox Awareness Week will take place from 4th – 10th May this year. Supported by Care, the number one brand sold into UK pharmacy and makers of ViraSoothe Chickenpox Relief Cooling Gel and Spray Gel.

Chickenpox Awareness Week aims to raise awareness and help better inform parents about the chickenpox virus and how best to manage and treat the condition. 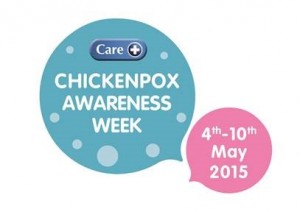 Research shows nine out of 10 children in the UK will catch chickenpox, most of them before the age of four. Caused by the highly contagious virus, varicella-zoster, chickenpox results in a number of very unpleasant symptoms including an itchy rash, spots and blisters. The resulting scratching can lead to further infections, sleepless nights and permanent scarring.

Research has found that scratching and scarring are two of the top concerns for parents when it comes to chickenpox. With over half saying they worry about their children scratching, and 38 per cent saying they are concerned about spots scarring.

BBC Health Correspondent and family GP Dr Sarah Jarvis says: “Chickenpox spreads quickly through coughs and sneezes of someone who is infected and although symptoms tend to be mild, chickenpox is incredibly itchy which can be very distressing for both parent and child.”

Parents can have a number of health concerns when it comes to chickenpox, therefore, they need to make sure they are getting the best expert advice. Here Dr Jarvis busts some of the common misconceptions about the illness:

MYTH. “Chickenpox in children is usually a mild disease that gets better in a few days without the need to see a GP. If you feel confident your child’s symptoms are chickenpox contact your pharmacist by telephone or visit your local chemist without your child to prevent infecting vulnerable members of the public. However, if your child is under four weeks old, has breathing difficulties, chest pains, if they become very drowsy or wobbly on their legs, can’t take fluids because the rash in their mouth is severe, have a rash which bleeds or bruises under the skin, become more and more unwell or the skin blisters have become infected and look yellow or pus-filled, it is important to seek medical advice.”

MYTH. “Research has shown that 1 in 8 parents said they would consider deliberately exposing their child to chickenpox in order to get the illness “out of the way”2. Most doctors agree this is not a good idea! Imagine if your child was the 1 in 1,000 who was admitted to hospital with complications and you had deliberately exposed them. Parents should allow their child to experience the illness naturally.”

MYTH. “There is no child safe version of aspirin and it should never be given to a child under 16 years old. Instead try Care Infant Paracetamol Suspension (100ml, £2.45 from independent pharmacies nationwide), which reduces fever and provides pain relief.” Ibuprofen medicines such as Care Ibuprofen for children are very effective for many childhood complaints, but it’s best to avoid any form of ibuprofen in children with chickenpox

MYTH. “There is no clinical evidence to suggest that calamine lotion does anything to relieve the symptoms of chickenpox. Calamine lotion offers a momentary cooling effect as the liquid evaporates from the skin. However, this drying effect may exacerbate the condition and actually cause further itching. Consider using Care ViraSoothe Chickenpox Relief Cooling Gel or Spray Gel to cool the skin and relieve itching.”

• My child has been ill for five days and is still getting spots, this is not normal

MYTH. “It is completely normal for children to acquire more spots for about 7 days. The initial fever often starts a day or so before the spots come out and usually starts to settle after about three days. The spots will scab over and dry up, but may take 2 weeks to go away completely. Complications are very rare in a healthy child but if you are at all worried you should consult a doctor.”

What is your experience? Have your children had chickenpox or are they yet to have it? We have two who have had it and two yet to have it!