The playroom in our house takes a serious bashing. It is used and abused everyday by the children and it is a place to not only play, but to relax and learn as well.

I decided recently that I needed a new system for organising the toys as it was driving me crackers. A better system and a means of controlling the amount of ‘stuff’ out at any one time that is.

This desire to create a better system and storage space sparked a whole playroom makeover. After consultation with the children we decided on a “Jungle” theme, for more information on how to create your own jungle themed room click here, Dulux can guide you through every step of the way.

It was really important for us to involve the children in this process as it is their play space and therefore needed their input. Recent research by Dulux found that children identified decorating their bedroom or play space as the second most important thing they had ever done even beating their first day at school!

Expert Developmental Psychologist Dr Sam Wass says, “It’s vital to children’s development to sometimes let them be in charge for a change” -our children were very decisive about the theme and fortunately for us they all agreed.

Dulux has a great selection of videos showing how to recreate loads of different looks from a starry sky for budding astronauts to a tropical jungle-scape for little explorers. Dulux’s Endurance+ paint is wipe clean, meaning inevitable ketchup, mud and coloured pencil stains won’t ruin your lovely designs! Hooray! 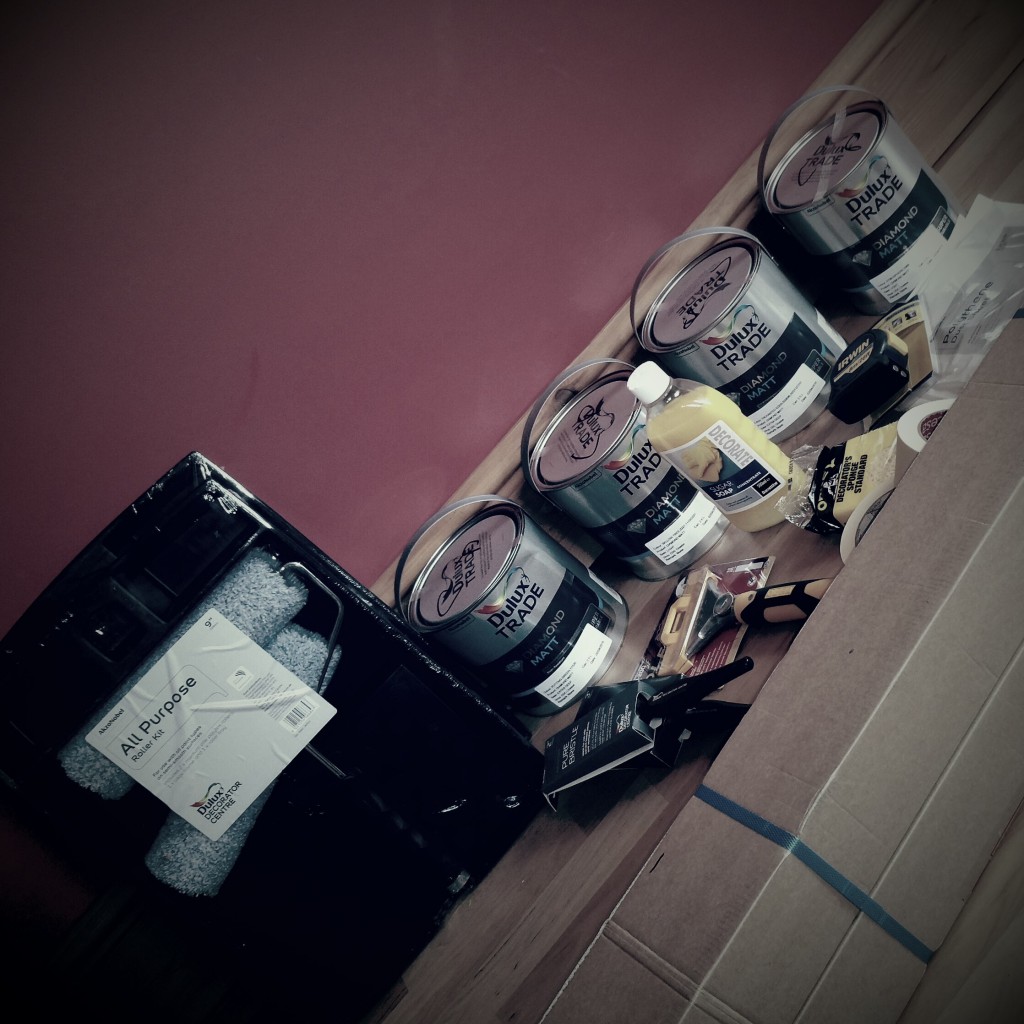 We didn’t decorate when we moved in, so this is the original colour on the walls here. We discovered that the paint on the walls was really poor quality. So poor quality it all came off when I pulled off the superb quality wall stickers we had previously had on the walls. Whoops! 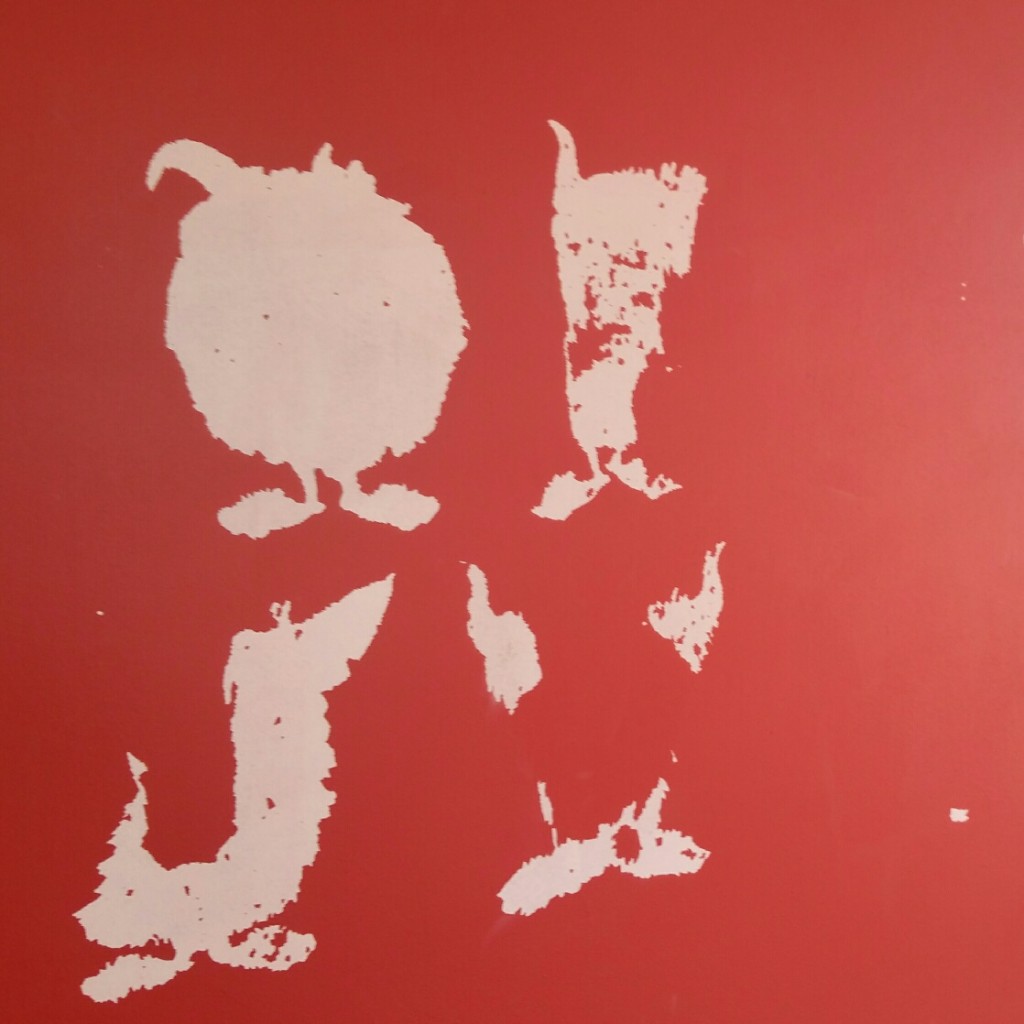 After lots of conversations with Dulux and several failed attempts at removing the old paint, which seemed to actually be well on the walls in the bulk of the room, we were advised to remove any flaky paint, sand down and prepare the walls by washing with sugar soap. There was quite a lot of filling that had to be done and skirting boards that needed removing so the preparation seemed to take forever. I had lots of “what are we doing?” moments that’s for sure.

We then began the huge task of covering the red walls. To do this we used a watered down version of the Dulux Vinyl Matt Magnolia paint, which has excellent opacity. We applied two coats of this 80/20 paint and water mix to the areas of the walls where the paint had been removed and allowed time to dry. After this we applied two coats of the paint, without any water added to the entire room. This took me 6.5 hours in between going backwards and forwards to the children who should have been asleep! Well it wouldn’t be parenting if it was easy now would it? 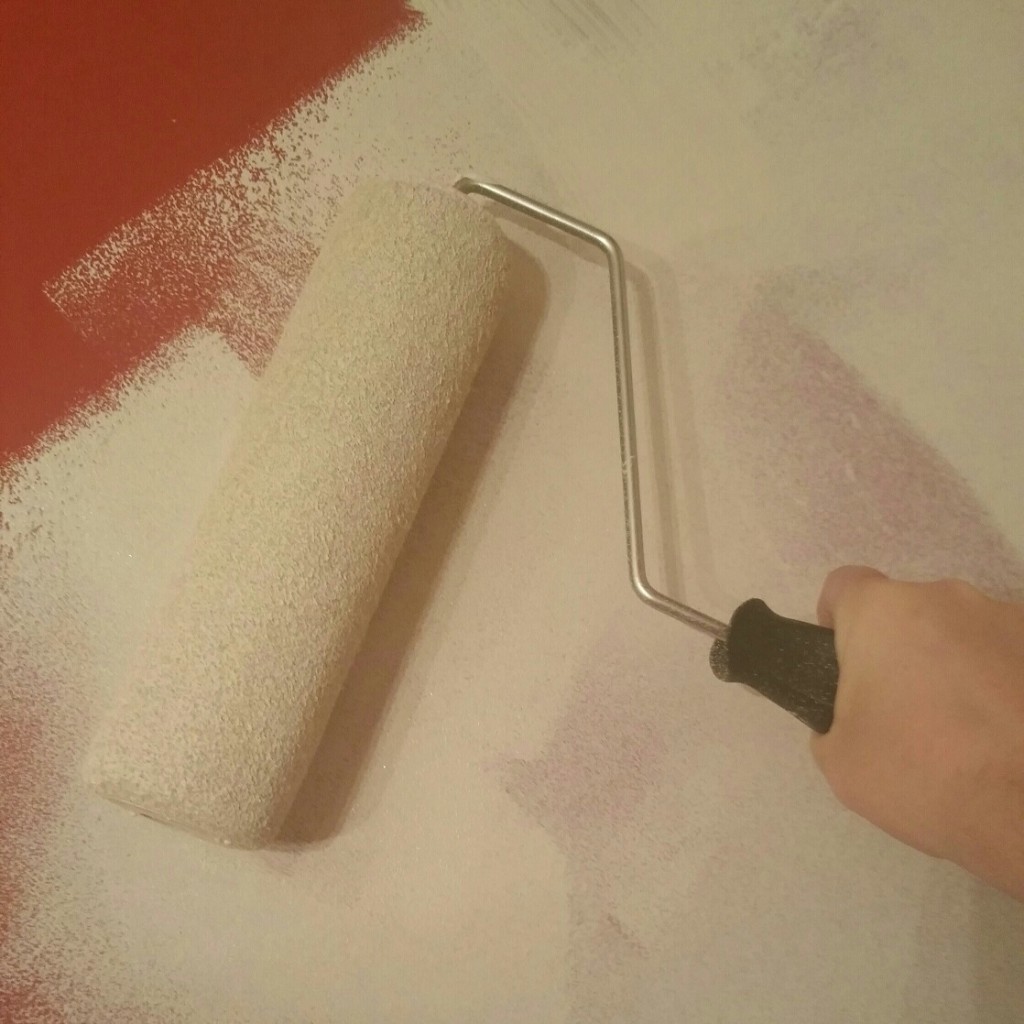 The next stage was to paint the whole room with our base colour for the jungle “Atmosphere”. This was a total dream to apply, the coverage was superb and we applied two coats. We decided to paint the ceiling and coving with the same colour and were really pleased with the finish. 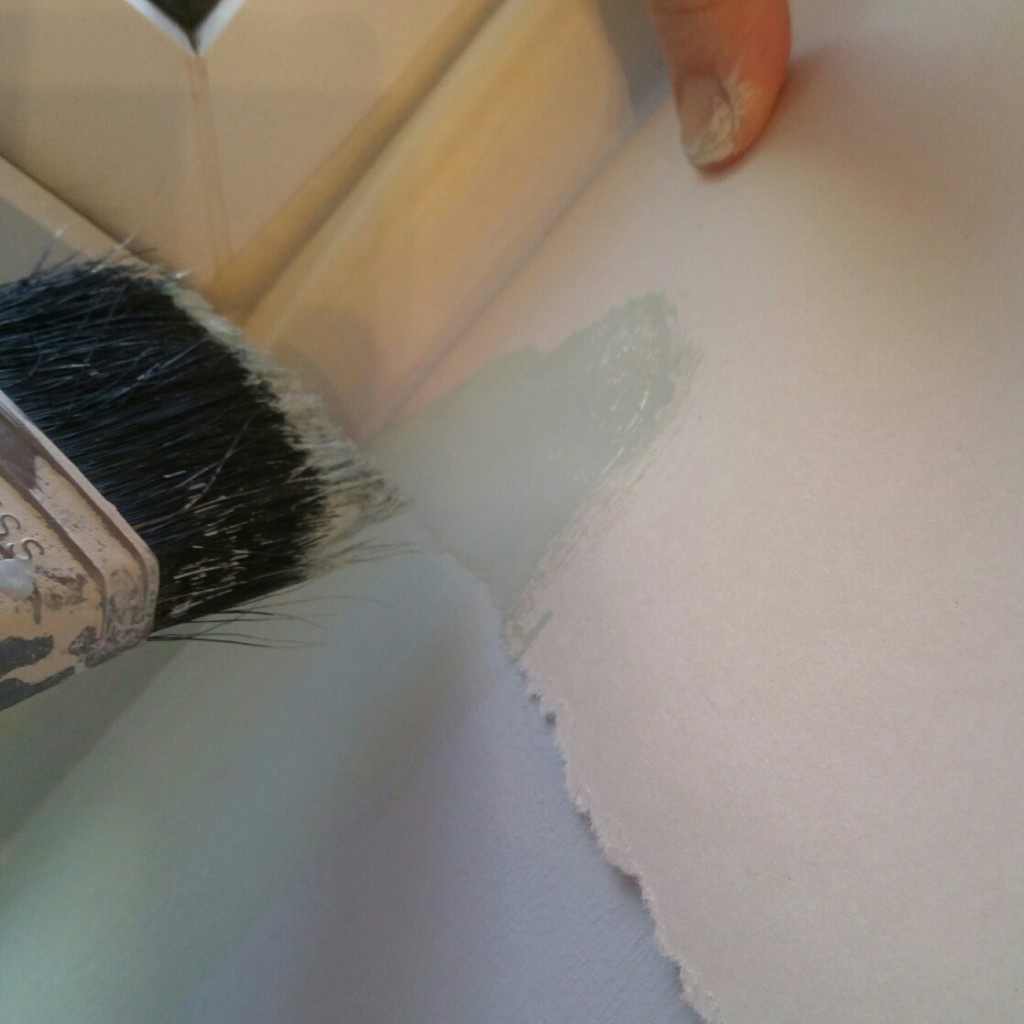 This is when things began to get more fiddly. In order to create the horizon lines of the jungle we had to tear lining paper to make a jagged edge and paint the new colour downwards from that point. The next colour we applied was Willow Tree. This went on really well over the top of the Atmosphere and we only had to apply one coat of this as it looked really good. 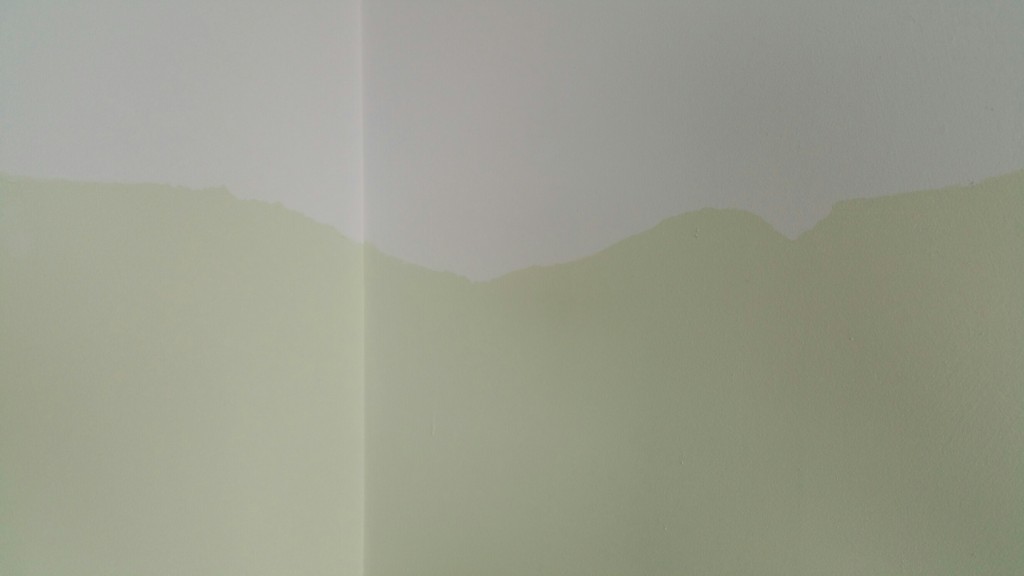 The next stage was to repeat the process with the torn paper to create the next horizon line, obviously that didn’t follow straight away as the paint needed to totally dry. The next layer was called Enchanted Eden, which we didn’t find went on that well. It required two coats and another touch up after that, and consequently took quite a while.

After this, there was a further horizon line to tear and the final layer of Putting Green paint went on at the base. This also had two coats to achieve the really dark colour.

Obviously after painting there are lots of tidying up type things to do and then we began adding the other features. One of the first things we added were some gorgeous lime green roller blinds from Clover and Thorne. I absolutely LOVE these and they instantly transformed the room from a work in progress to something that looked much more ‘finished’. These are ideal to block out the sun onto the television if the children are watching something, but equally look great just rolled up and framing the windows. If you are looking for blinds I urge you to check out Clover and Thorne and their collection of stylish window fashion. 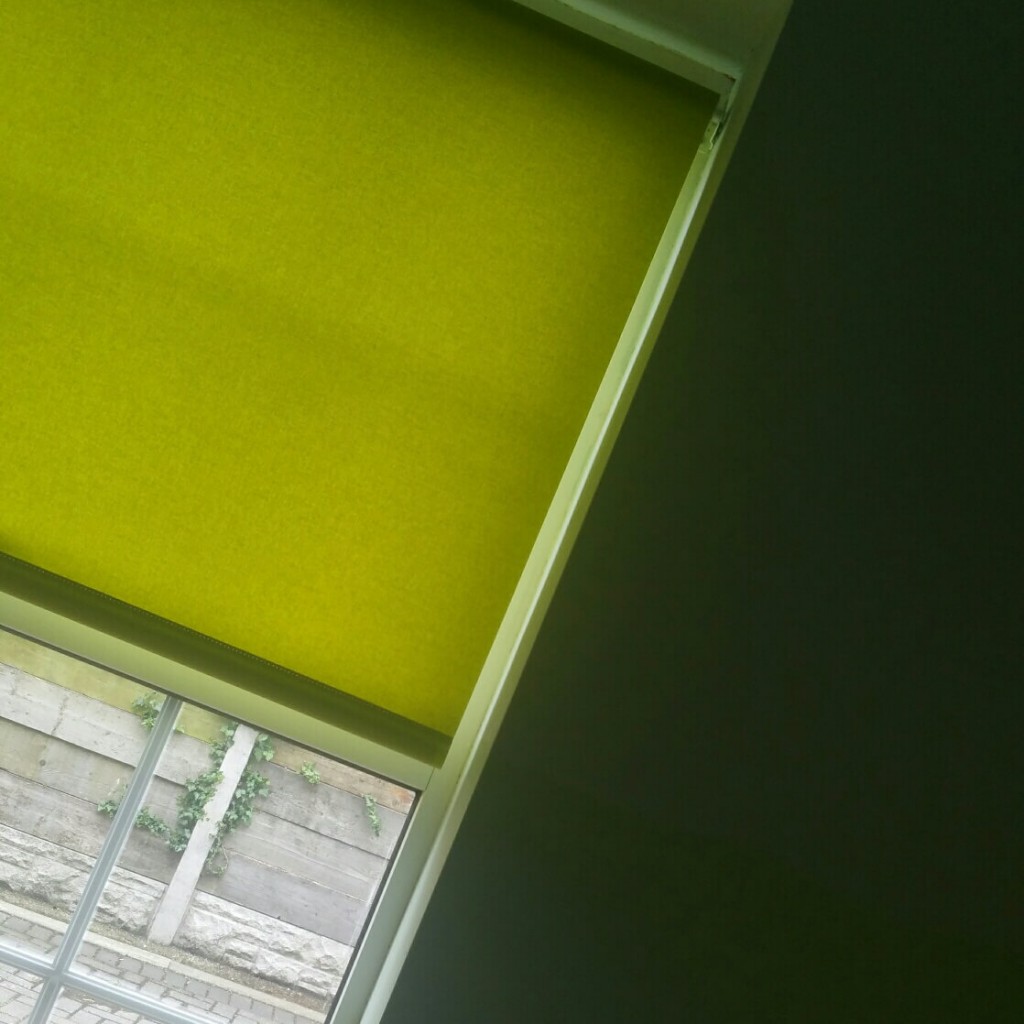 My main goal with the playroom has been to create a bright and colourful place to play with space to actually play not just a whole heap of toys in one room. You know the story don’t you…when they can’t just ‘play’ because there is no floor space!

One of the biggest issues for us before was the dressing up. It was all shoved inside a chest in the playroom but it didn’t really fit and of course that one outfit the children required each day would always be at the bottom, meaning that everything got turfed out and there was instantly no space.

I’d had this idea for ages that I wanted all the dressing up to be hanging on hangers in a wardrobe type thing, in order that the children could see exactly what they had and only that outfit needed to come out.

I also had this idea that I wanted to group the toys and label them. Sounds a little OTT you might be thinking but hear me out. My idea was that I would group the toys in order that the children’s play could be less of a free for all and more about them selecting what they wanted to play with, exploring and playing with that, learning to tidy that away and move on to something else.

In order that everything didn’t just get pulled out of the tubs and lumped together, and at the same time thinking about my plans for the dressing up, I decided a large wardrobe with sliding doors, a hanging rail and shelving was the way to go.

After finding one I liked online, it was a total nightmare process which I won’t bore you with, but let’s just say the process of getting the wardrobe and putting it together wasn’t straightforward. Think careless courier, useless customer service and missing parts and that’s part the way there.

Anyway, once finally up I was really excited to fill the wardrobe with all the toys. I wasn’t sure how much I’d fit in and knew some things would just be too large or the wrong shape, but by using a selection of brightly coloured plastic tubs from Wham and some funky heart labels I was able to fit in lots and lots of stuff in an organised fashion. It felt sooooooooooooooo good to be able to shut the sliding door on it all and see a tidy room afterwards.

The tubs are actually stackable but in order to fit more in the wardrobe I didn’t stack them in that way, I sat them inside each other to make more space. 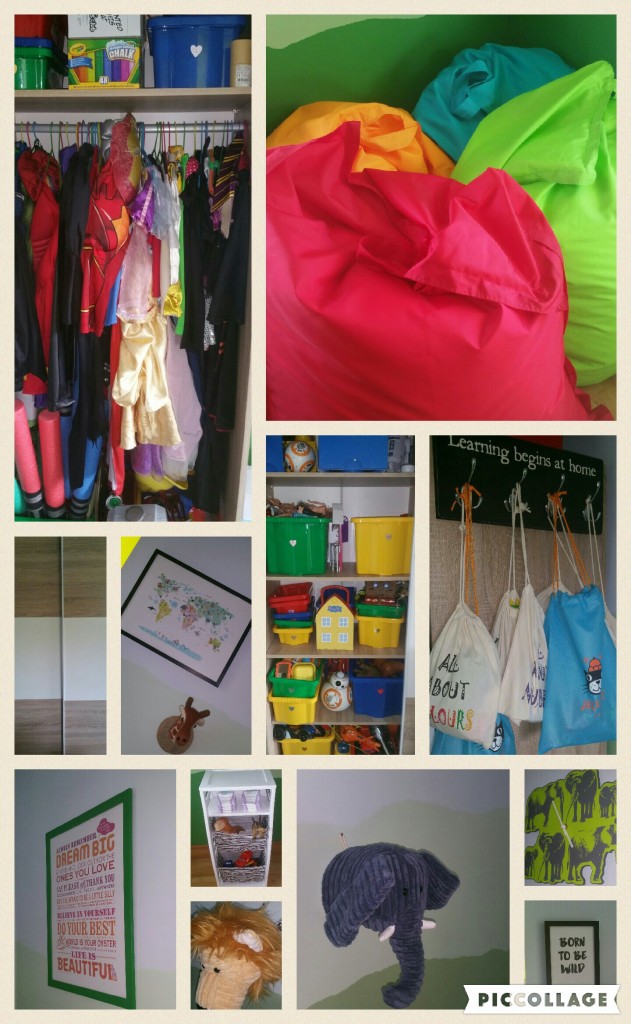 Once the major jobs were done, it was time to put the finishing touches to the room. These included four giant brightly coloured beanbags (one for each child) which I bought from an eBay shop. The idea being that they could pull them out of the corner of the room to sit on to play or watch TV.

We bought a new TV for the corner of the room that we wall mounted. We chose a Smart TV with DLNA, in order that we can stream media (mainly movies) from the computer to the TV via the WiFi. One of the other things that we seemed to end up with before were lots of DVDs out of their cases or in the wrong case etc – this solves that problem! Hurrah!

Underneath the television we put a Multy storage unit to store nappies, wipes and potty training bits and bobs so we’ve always got some downstairs. To read about the other things the Multy can do click here.

Wall hangings consisted of an elephant and lion head that I found online at Jelly Cat. I really love these but so wished they did all the jungle animals. These were the only two in the range. I bought a giraffe head from an eBay shop, as that was the closest I could find to the other animal heads.

I found an elephant clock at Space 1a Design and I love it because there are six elephants of different sizes, which match our family. Unfortunately this has now been discontinued which is a real shame, but take a look as they have loads of other lovely items.

Three prints I picked up from the online print store Desenio – we’ve got some of their things elsewhere in the house and you can read more about that here. The coloured one is a world map showing where all the animals live which I really love, but their is loads of fun animal wall art online. 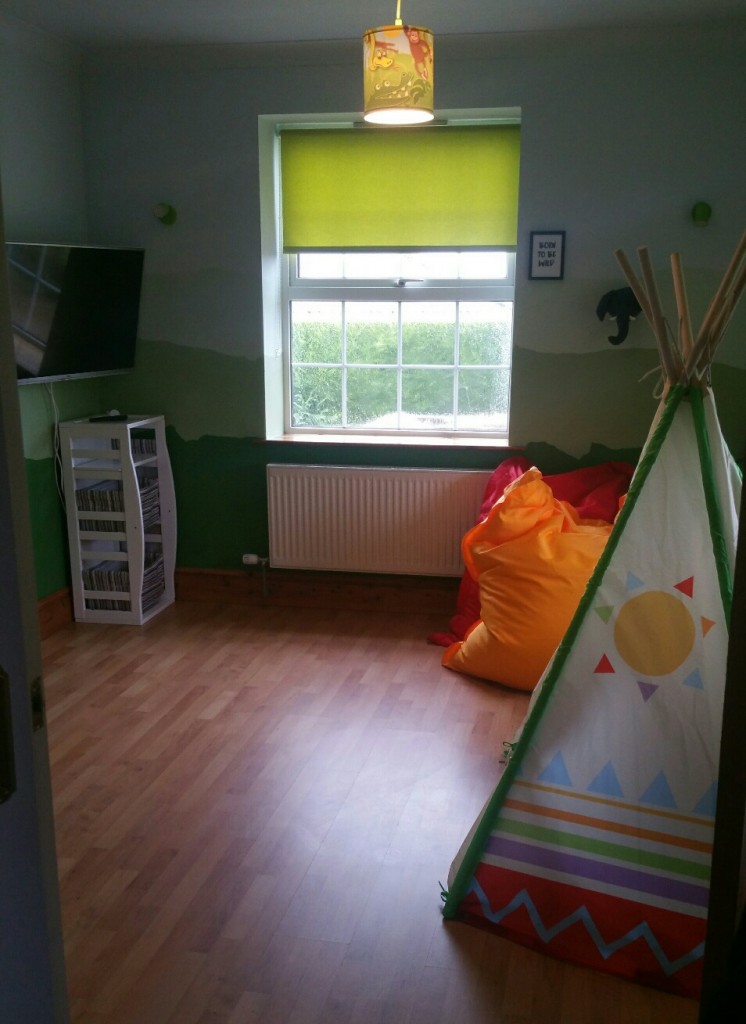 We have a quote that Grandma bought for the children and that I found a simple green frame for, reminding the children what is really important in life.

The plaque hanging on the side of the wardrobe “learning begins at home”, is a bespoke piece I bought from a talented school friend, to hang the children’s learning sacs from. She hand makes a wonderful range of interior things and gifts and if you want to check for yourselves her website is Gracie Jacques.

Another finishing touch was a wigwam from Argos, this really fits in with the bright theme of the room and provides a ‘den’ for the children to either play or relax in. The little boys in particular love this space.

The item that delayed the completion of the project beyond belief was the delayed delivery of a green pendant to hand a jungle light shade from. You wouldn’t think it was that hard to find one but it was a nightmare. The jungle shade I bought from Amazon and the pendant and the small wall lights also came from Amazon.

As a final finishing touch I bought a single duvet and a jungle duvet cover to put inside the wigwam as we have laminate flooring and it was obviously quite hard to lie down on. This made it really snuggly and a proper little den.

The project has taken way longer than it should have done due to issues with the paint, delays in deliveries and missing our windows of time…but, we are really pleased with the way it has turned out…and so are the little people, which is of course the main thing!

Here’s a video to show you how it looks in more detail.

Play is really the work of childhood.” –  Fred Rogers